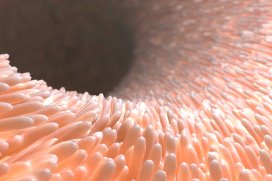 Impact of mycotoxins on intestinal health

The mycotoxins present in animal feed represent a very real threat to animal health. Even small amounts of mycotoxins can have a negative effect on gut health. This can make the animal more susceptible to infectious diseases.

Gut health is of major importance to maximize the health, welfare and performance of production animals. Cattle have traditionally been selected for optimum feed conversion and maximum body weight gain. However, the intestinal health of production animals is constantly challenged throughout the life of the animal by exogenous and endogenous stress factors. Among the most important exogenous stressors and safety risks for the future feed industry and the safety of the feed supply chain are mycotoxins.

Mycotoxins are secondary metabolites produced by toxigenic fungal species present in a multitude of cultures. Mycotoxin contamination appears throughout the crop life and processing cycle, from pre-harvest, harvest and post-harvest, as well as the process stage.

Besides the negative impact of mycotoxins on intestinal epithelial cells, these toxins also impact on other elements of the intestinal barrier, such as the mucus layer, the secretion of antimicrobial peptides, chemokines and cytokines, and stress. oxidative. Exposure to DON and / or zearalenone (ZEN) mycotoxins decreased the number of goblet cells in the small and large intestine of pigs, which are of major importance for mucus secretion. In addition, sub-toxic doses of DON have been shown to reduce intestinal mucin production by specific decrease in levels of mRNA encoding membrane associated mucins in pigs and poultry. Several mycotoxins are also able to modulate the production of inflammatory intestinal cytokines. For example, intestinal exposure to DON induced a pro-inflammatory response with increased expression of interleukin (IL) -1α, IL-1β, IL-8 and tumor necrosis factor (TNF) -α.

Interaction between mycotoxins and the gut microbiota

The gastrointestinal tract is home to a dynamic microbial population that forms a complex ecosystem and maintains a symbiotic relationship with the host animal. The intestinal microbiota contributes to several physiological functions such as protective, structural and metabolic functions, regulation of host homeostasis by contributing to optimal digestion and absorption, regulation of energy metabolism, prevention of mucosal infections and modulation of the immune system. Disruption of gut microbial ecosystems during farm animal husbandry can dramatically increase the risk of disease. Few studies have demonstrated an impact of exposure to mycotoxins on the composition and diversity of the gut microbiota in humans and different animal species. It has been observed that the abundance of different bacterial families / genera such as Lachnospiraceae, Ruminococcaceae, Lactospiraceae, Faecalibacterium, Clostridiaceae Enterobacteriaceae, and Roseburia may be affected by exposure to mycotoxins. These changes in the composition of the gut microbiota could be associated with the impact of mycotoxins on digestive physiology, enterocyte viability and mucus production.

The negative impact of mycotoxins on gastrointestinal physiology and the immune system could also increase the susceptibility of animals to infectious diseases common in animal production, such as increased Salmonella Typhimurium in pigs by promoting bacterial invasion, trans-intestinal epithelial passage and absorption by alveolar macrophages. In addition, feeding pigeons with a diet contaminated with DON resulted in an increase in the percentage of losing pigeons. Salmonella compared to birds fed a control diet, 87% vs. 74%, respectively. In addition, feeding a diet contaminated with DON or FUM has been shown to be a predisposing factor for the development of Clostridium perfringens Necrotic enteritis induced in broilers. This coincides with the negative effects mentioned above on selected components of the intestinal barrier of the host chicken, namely villus height, tight junctions, mucus, oxidative stress and microbiota homeostasis. Recently, it has also been shown that DON also influences the infection profile of Campylobacter jejuni in broiler chickens. The co-exposure of DON in poultry feed and C. jejuni resulted in an improvement C. jejuni colonization in the intestine as well as an increase in intestinal permeability.

In conclusion, the ubiquity of mycotoxins in food represents a significant threat to animal health. Even low to moderate amounts of mycotoxins negatively impact gut health by causing gut leakage, gut inflammation, and influencing the composition of the gut microbiota. Therefore, the metabolic, physiological and immunological intestinal disturbances induced by mycotoxins mean that animals are more susceptible to infectious diseases.

References are available upon request.

How to grow your own probiotics for better gut health

The viral link between COVID, gut health and immunity