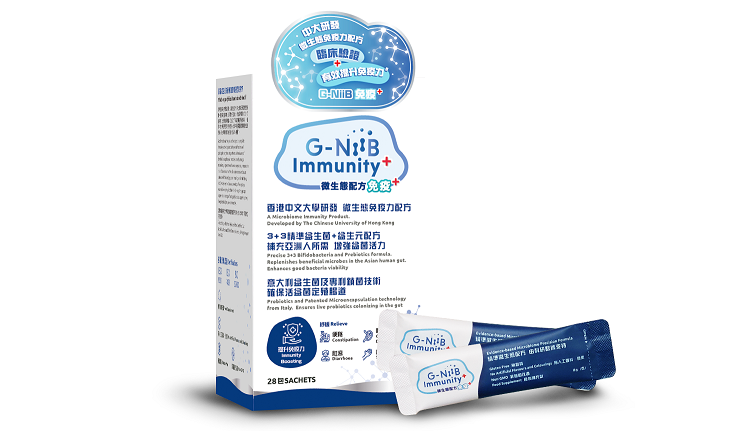 GenieBiome Limited is a spin-off from the Gut Microbiota Research Center of the Chinese University of Hong Kong (CUHK).

The center has been studying the Asian gut microbiome for 10 years. A government-funded research organization, it must commercialize the results of its research, which led to the birth of GenieBiome and G-NiiB, a brand of probiotic supplements.

Both products were developed before the COVID-19 outbreak to treat gastrointestinal and skin issues.

However, during the pandemic, the formula was tested on COVID-19 patients, which yielded favorable results.

“The formulation was not developed specifically for COVID-19, it was a formulation that was originally developed for immunity, for Asians, and also for other functions that probiotics serve, like for gastrointestinal problems or skin problems, asthma.​

“But when COVID-19 hit, researchers did a clinical study of the immunity formulation on COVID-19 patients and the results were very positive,” Jonathan Wong, regional sales manager at GenieBiome, said NutraIngredients-Asia.​

The main difference between the two lies in their dosage.

Three probiotic and prebiotic strains are microencapsulated in the final products.

First launched in Hong Kong in December 2020, the products are now sold through the company’s website, at over 300 Mannings outlets, over 200 clinics and eight private hospitals.

“I can say that the market response we received in Hong Kong is very good. It is very successful and growing rapidly.​

Wong revealed that for the first two months of this year, the company recorded $2.5 million in revenue from G-NiiB Immunity formulas.

That’s 16 times more than the US$150,000 revenue recorded in the same period last year, when the product was just launched.

He said the company expects to generate $15 million in revenue this year.

G-NiiB Immunity Plus was also launched in Singapore in March and is sold in Guardian, Watsons and e-commerce stores such as Shopee and Lazada.

“We are launching in Singapore because there are many similarities between Singapore and Hong Kong in terms of lifestyle and diets,” said Wong.

Products are also sold in China and Malaysia through Cross-Border Electronic Commerce (CBEC).

The three strains of probiotics come from the Bifidobacterium kind.

“Researchers performed a metagenomic sequencing study on the gut microbiome of many Asians and through the analysis they found that these three strains of bacteria are the most important and also have a positive correlation with the creation of other bacteria . ​

“They act as a trigger point to trigger the building of the entire gut microbiome ecosystem ecosystem,” said Wong.

One of the strains is Bifidobacterium adolescentis. ​

“Bifidobacterium adolescentis is a strain that is received from birth and whose level gradually decreases with age. Our study found that 85% of subjects lacked this specific strain in their gut. ​

“So most people would miss it and they can replenish that specific strain through the consumption of the product,” said Wong.

Supplementation of the above probiotic formula has been shown to reduce plasma pro-inflammatory markers and restore depleted beneficial organisms and was associated with reduced nasopharyngeal viral load in COVID-19 patients.

During the open-label proof-of-concept study, the intervention group – consisting of 25 patients – received two daily doses of the probiotic known as SIM01 for 28 days. Each dose consists of 100 billion CFU.

The control group – made up of 30 patients – received the same treatment protocol but not the probiotics.

“​​Our study showed that the SIM01 formula was associated with a significant reduction in the pro-inflammatory immune markers of IL-6, MCP-1, M-CSF, TNF-α and IL-1RA compared to to witnesses. This supports our hypothesis that SIM01 treatment has a potent anti-inflammatory action in hospitalized COVID-19 patients.​

“Importantly, we found that some commensal bacteria depleted in COVID-19 patients were significantly increased after receiving SIM01 [the probiotics]”, the researchers said.

For example, patients receiving the probiotics had an increase in Actinobacteria and Firmicutes, in addition to Bifidobacterium. ​

“Our results indicated that SIM01 not only replenishes bifidobacteria alone, but also promotes the coexistence of other commensal bacteria…We also found that harmful bacterial species enriched in COVID-19 decreased significantly after receiving SIM01. »​

The findings were published in the Journal of Gastroenterology and Hepatology.​​

A person whose intestinal microbiota is rich in Bifidobacterium adolescentis would have a better response to the COVID-19 vaccine, according to joint research between CUHK and the University of Hong Kong.

The study involved subjects who took the SinoVac or BioNTech vaccine.

The researchers assessed the gut microbiota and the amount of antibiotics in the subjects.

It was found that the richest subjects Bifidobacterium adolescentis in the intestine have a higher level of antibodies.

“So the products are something that we encourage people to use for a better vaccine response and a higher level of antibody generation,” said Wong. ​

The results of the study have been published in Intestine.​​

In the future, the company plans to launch a probiotic aimed at reducing the risk of colorectal cancer.

The idea was to improve the gut microbiota and eliminate harmful bacteria of the Lachnoclostridium species.

“​We have previously shown that bacteria in the probiotic formula can reduce colon cancer in laboratory experiments and reduce bacterial genes associated with colon cancer in humans. A colon cancer linked to a specific hostile intestinal bacterium is the bacterium M3”,Wang said.

Human microbiome-based gut health and nutrition testing market worth US$885.52 million by 2030

why are young women bloated?