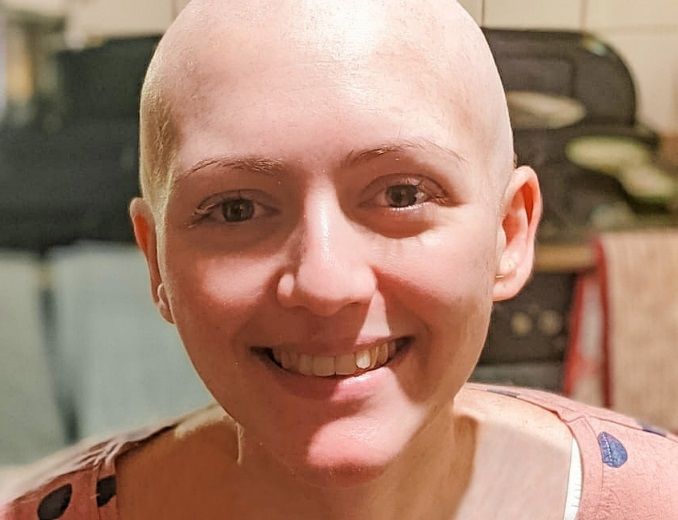 For the past few years, Essex-based Monique Buckingham (above) has battled relentlessly with stage four advanced bowel cancer, which has resulted in at least 92 cycles of chemotherapy.

Monique managed to stay in remission for two and a half years. However, the cancer eventually returned to her peritoneum and then spread throughout her abdominal cavity, including her uterus, belly, and ovaries.

The full extent of the spread was discovered after she underwent a 14.5-hour surgery known as HIPEC which uses heated chemotherapy to attack cancer cells.

During this operation, Monique lost more than 90% of her small intestine, two thirds of her large colon and layers of abdominal mucous membranes and was plunged into surgical menopause having to undergo a total hysterectomy with bilateral oophorectomy.

In the period just before Christmas, Monique became increasingly ill and was hospitalized until Christmas Day (when she was again released home).

However, she was readmitted as an inpatient and told her cancer had now caused a bowel obstruction, meaning her condition was too advanced to benefit from any further trials (in the UK) placing her in “care”. end of life”. program with terminal diagnosis.

Together with her parents, Paul and Anne, Monique remains determined to try to seek alternative and innovative bowel cancer treatments and therapies abroad.

Paul said: “The whole family has been shaken by this catastrophic development, but our strong, brave and beautiful daughter is just not ready to give up on her life. As painful and constraining as it may be.

“Constant research has revealed a number of ongoing bowel cancer treatment projects around the world, including ‘mistletoe injections’ which are obviously incredibly expensive but, thanks to our well-known appeal site for Monique (lifeformique at www.gofundme.com), we are determined to raise enough money (up to £500,000) for her to receive any ‘breakthrough’ treatment that will fight cancer and prolong her life.

Paul also points out that since the last diagnosis, the gofundme site has skyrocketed over the past two weeks by £50,000 and is currently at just under £70,000.

He added: “The support from everyone, including complete strangers, has been amazing.”

A case in point is Lydia Callan from Wivenhoe, a prominent member of the Colchester Harriers Running Club, who will be competing in the Brighton Marathon on Sunday April 10.

Lydia said: ‘I have been following Monique’s lifeofmic call for two years and I think she is an absolute inspiration to others with this shocking disease, showing her struggles, challenges and determination , which is why I chose to run for it. an incredible young woman because she fits perfectly with my personal goal of “always challenging the impossible”.

Paul added: “We have many cancer trials to consider around the world for alternative treatments, so we are pinning our hopes that we can raise enough funds on the Gofundme site to take the next step forward to our dear Monica.”

Click to find out if your part of the country is one of the areas we cover.