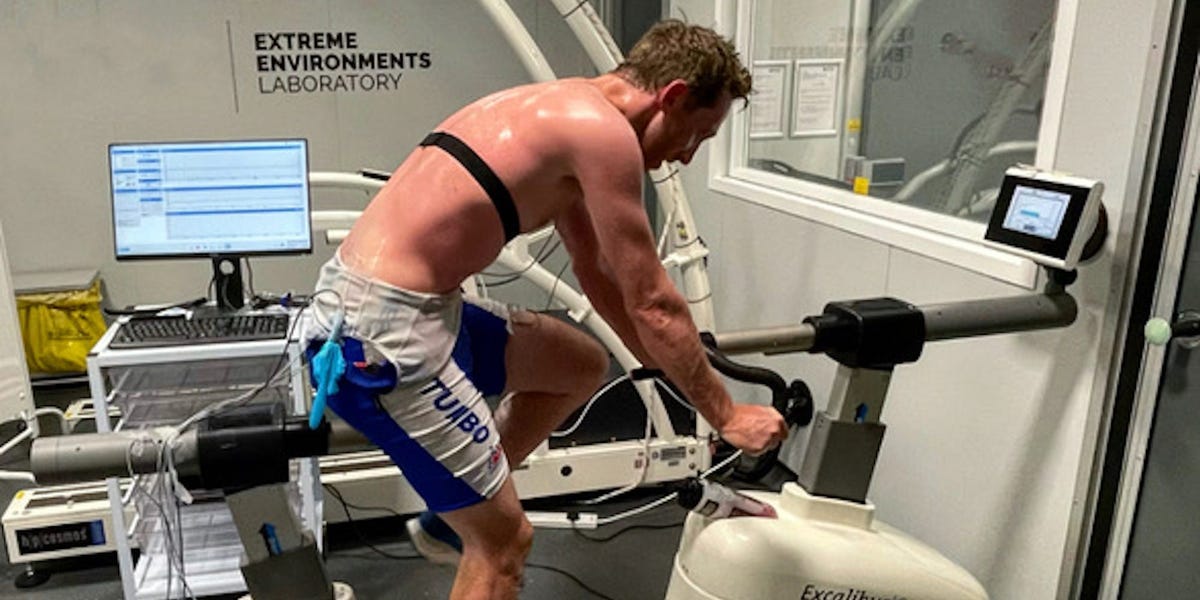 Owen Jeffries, a Newcastle University sports physiologist specializing in heat adaptation, recently completed an Ironman, one of the most demanding sporting events in the world, during a heat wave.

Temperatures during the race in Austria, which he completed in 12 hours and 24 minutes, reached 35°C. The weather was so hot that athletes were prohibited from wearing wetsuits for the swim leg in a glacial lake.

He shared with Insider five science-tested methods to prepare his body for intense exercise in extreme heat.

Give your body a few days to adjust to the heat.

You should avoid strenuous exercise during a sudden heat wave, as the body needs time to adjust to the heat.

At first, the body does not sweat as much as it needs. The heart has to pump harder to bring more blood to the skin, where the evaporation of sweat cools it. After a few days, the body begins to sweat more and the heart rate drops, Jeffries said.

To prepare for the heat, Jeffries trained for 60 to 90 minutes over ten days in his lab’s extreme environmental chamber that simulated the conditions he would race in.

Accurate measurements showed that his body had started to adapt four or five days after starting training and that he had fully adapted to the heat within ten days.

Even after ten days, you have to be wary of pushing yourself toward your usual goals, Jeffries said.

“Don’t go outside and expect to be able to maintain the same amount of physical activity as you would in a normal climate. Performance in a hot environment is reduced by 10-30%,” Jeffries said, citing a study of 2019. .

Be on the lookout for any signs that you may have heat illness, such as dry mouth and tongue, thirst, headache, lethargy, dry skin, muscle weakness, dark urine and dizziness.

In this case, immersing yourself in relatively cold water is the best way to cool off quickly, he said, but watch out for cold shock.

Weigh yourself to optimize your hydration

“Dehydration as low as 2% can impact exercise performance,” Jeffries said.

Dehydration is bad for the body. As blood volume decreases, the heart must pump harder to keep circulating. In hot weather, this happens more quickly because the body sweats more to cool down.

However, it is also possible to drink too much, especially when you are thirsty. It can also cause a condition called hyponatremia, when nutrients like sodium or potassium are too diluted in the blood. It can be deadly in excess.

To optimize his performance, Jeffries used instruments in his lab to gauge exactly how much sweat he loses in an hour of exercise. He used this number to calculate how much fluid he would need to take in during his 12-hour Ironman.

A low-tech way to do the same thing at home is to weigh yourself before and after about an hour of exercise.

Start by drinking 500ml of water 45 minutes before exercise. This figure will be accurate if you don’t drink water or go to the bathroom and remove any sweat-soaked clothing.

All liquids are not created equal

If you’re going to be exercising for more than 90 minutes, it’s recommended to replenish your sodium levels, Jeffries said.

“Sodium loss should be considered beyond 90 minutes of activity,” he said.

When you sweat, you not only lose water, you also lose minerals.

A sign that you’re not giving the body what it needs is that you crave salt after exercise, Jeffries said.

“If you were really craving salt, that means your body needs it. You need to get it any way you can,” such as eating crisps, he said.

Drinking electrolyte-rich fluids or taking sodium supplements can prevent this from happening.

Some nutrition websites offer sweat tests that can help estimate how much salt you’re losing during long-duration exercise, Jeffries said. Early research suggests sodium citrate may be kinder to the gut, Jeffries said.

“General recommendations during exercise are around 1000 mg/hour,” Jeffries said. He pointed out that when not exercising strenuously, general dietary recommendations should not exceed 1500 mg of sodium per day.

Help your body by keeping your core temperature low

Ironman has misting fountains or buckets of cold water to help athletes keep their body temperature low, but dousing yourself and your clothes with water has a similar effect, Jeffries said.

Ice cubes or cooling vests can also help, but they’re “not practical in a hot environment,” Jeffries said.

Jeffries also pointed to the 2022 Tour de France, where the athletes had to perform in 100 degree heat.

“Some professional teams have actually adapted their jerseys with small pockets to insert small pockets of ice around the body,” he said.

If the event is long, train your stomach for heat.

If the event is long, you can’t rely on just one meal to keep your energy levels high. The downside is that eating while exercising can lead to gastrointestinal upset, which is made worse by heat, Jeffries said.

To avoid this, you can train your stomach little by little, by eating and drinking while you exercise, Jeffries said. He trained specifically with food he knew would be available at the Ironman aid pits to avoid any surprises.

If you are aware of your body’s need for heat, you can keep it in top shape

Jeffries said monitoring his body’s needs in the heat and sticking to a nutrition plan does wonders for his body.

“Given the length of the day, I felt pretty recovered the next day, enough to go for a light jog and swim,” Jeffries said.

“All of these different signs suggested to me that I had been optimally hydrated.”

Acclaimed Tamil actor-director T. Rajendar on his way home from treatment in the US

What you should know about medical loans -Paydaychampion